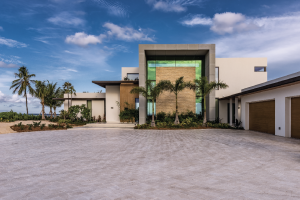 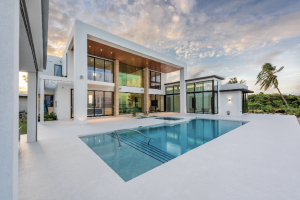 This four-bedroom, four full- and two half-bathroom house is set high amongst the sparse beachscape of East End, was intended to be a tranquil, isolated island getaway and its designers achieved this robustly and with confidence. Large expanses of glass capture the natural beauty of surrounding bush, sea and sky – clean lines frame and define almost inescapably ocean and landscape views throughout its interior. Natural clerestory light permeates the the home calibrating the sun’s movement in dynamic shadows as time passes by.

This house is aesthetically modern, almost cubist yet celebrates natural surrounding elements with smooth glazing and tectonic mass. The sandy colour and texture of the beach seamlessly become white rendered walls, dark bronze accents pay subtle homages to the Island’s colonial past and pastel tones to traditional colour schemes of days gone by.

Floor to ceiling windows reflect the wide ocean and render the structure almost skeletal. This sense of weightlessness carries through to the open-plan interior with its bridged double height volumes transforming this house into an extraordinary tactile, almost sensual, experience. 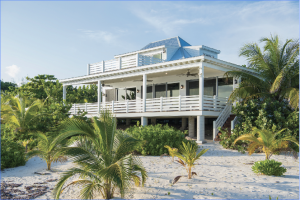 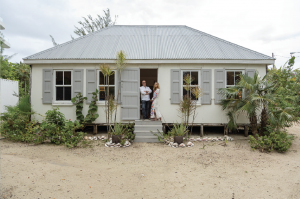 ‘Pinkie’ and ‘Driftwood’, two homes on the same property at Pull and Be Damned Point in South Sound, are home with- the one is a 1904 Caymanian Cottage restored in the traditional manner and the other a 2019 Cayman Styled beach house designed and built to respect Caymanian built heritage.

‘Pinkie’ (named after Nurse Pinkie Bush who once lived there) was an original wattle and daub cottage hidden behind a series of additions that had been made to the home over the last century. The second home,“Driftwood”, is the first of a brace of beach houses that speak to the Islands’ past heritage while considering its residents’ modern and changing lifestyles and societal influences.

These delightful little houses are architectural jewels that both acknowledge or even predict the environmental performance expectations of Cayman’s 21st centurywhile informing us what being ‘of this place Cayman’ really should mean.

Jalousie shutters, shading trellises and decorative wood brackets below the upper floor balconies reinforce the Cayman Great House aesthetic of this intriguing house. The nuanced grandeur of its façade hints at the size of this six bedroom, six full and two half-bathroom house but belies the intimacy of some of its interior spaces. Rooms and nooks are formally defined for family activities which makes this a traditional home- albeit a richly articulated one.

The designers’ understanding of the context of the Caribbean’s historical design vernacular is also evident in exterior finishes and interior spaces. Light colored walls paired with darker accents reinforce the architectural style throughout the entire structure. The light colour palette is a refreshingly modern twist.

Intricate wainscoted walls and a coffered ceiling in the Great Room amplify its traditional interior aesthetic while large glazed vistas frame its views to the North Sound waters- a spatial tour de force!